I challenged my DominoART members to an Alice in Wonderland Revival and for my contribution I decided to create a sculpture of altered dominoes.  But after sharing my idea with my sister, Paula, she suggested I make it into a pencil holder!  I'd already contemplated the idea and had decided on the sculpture, so when Paula suggested it too I guessed it was meant to be and went with the pencil holder instead!  Thanks Sissypoo ;-)  I hope you'll all be inspired to get out your rubber stamps and create your own Alice in Wonderland themed creation!
MATERIALS
Various Alice in Wonderland rubber stamps
(these Alice images are now in the public domain and can be found with various stamp companies)
Clock Collage rubber stamp by Frantic Stamper
Standard white dominoes
Ancient Page black dye ink
Sharpies
Heat gun
Blue painters tape
Metallic gold paint pens: broad and extra fine tips
Delta Ceramcoat gloss varnish
Paint brush
Xacto & Craft knives
Cardboard tube
Original/copy page from Alice in Wonderland book
Xyron perm adhesive
Scissors, Ruler, Pencil
Red silky cord
Aleene's Fast Grab glue
E6000 adhesive
INSTRUCTIONS ON HOW TO ALTER THE DOMINOES
Start by stamping all the various Alice in Wonderland images onto the dominoes using black Ancient Page dye ink and heat set the ink.  If you don't have an embossing tool/heat gun then just leave the dominoes to dry atleast over night. 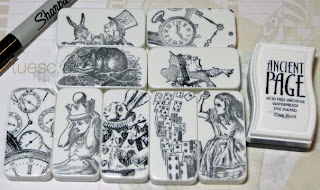 Once the ink has dried you can begin adding colour with Sharpies.  When I'm working on a bunch of doms at the same time I like to colour them production line style instead of completing each dom separately.  For these dominoes I started by colouring with Dandelion -  these areas I wanted the yellow to represent gold or to act as highlights.  Then added shading/depth to the same areas with Marigold. 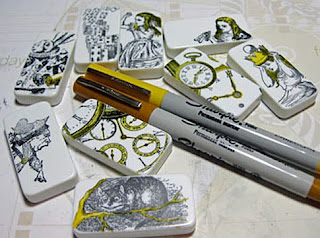 For even more depth and shading I worked brown into the same areas. 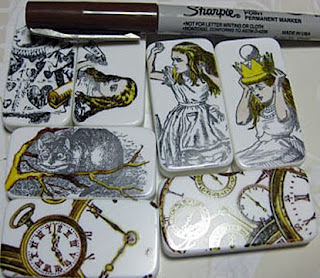 I then started adding Red to the various images and used Burgundy to add shading and depth. 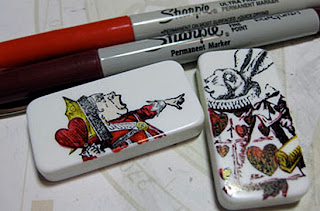 I started working on all the blue areas by colouring with Turquoise and the photo shows how I began adding dark Blue to those same areas. 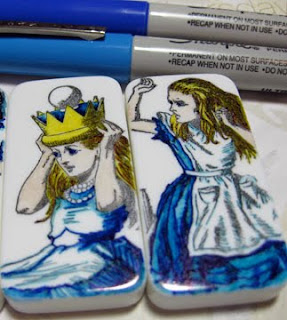 Once I'm finished with the main details or foregrounds of the images I then move onto the backgrounds. 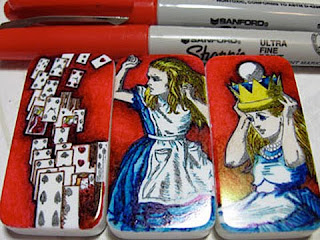 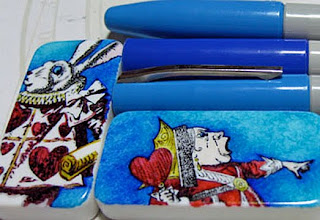 When I'm done colouring all areas of the dominoes I like to edge them with metallic paint for a finished look!  You can either just 'outline' the edge of the dominoes like I've done here or you can edge and colour the sides of the dominoes too.
TIP:  To get a neat outline I suggest you start by masking with blue painters tape!  Once you've got the hang of it you won't need the tape any more.  Wrap the domino with the tape and make sure to burnish the edges with a bone folder or your finger nail.  If you don't burnish the edges down the paint can seep under the tape and make a mess!  Then edge the dominoes with a broad point metallic paint pen and put aside to dry!
DO NOT BE TEMPTED TO REMOVE THE TAPE UNTIL THEY ARE DRY! 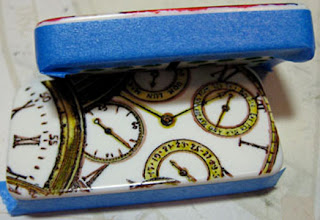 Finish off the dominoes by adding touches of metallic gold with an extra fine point paint pen and allow to dry before applying a sealer.  I sealed these dominoes with Delta Ceramcoat gloss varnish and a paint brush.  I decided to use the varnish instead of my usual trusty Diamond Glaze coz I've found that the glaze can sometimes make red areas look more orange which just would not be right for Alice In Wonderland!  Yes, you're probably thinking that the red areas in my pics look more orange but trust me, they are red and would look way more orange than this!  The domino with the title "Alice in Wonderland" was hand drawn and based on the font used in the new movie.

TIP:  Once you've completed all your dominoes you should have a piece of scrap paper that looks something like this: 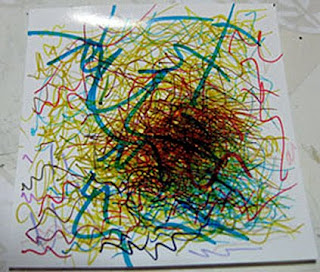 If you don't have anything that looks like this or no paper at all, then you're not 'cleaning' your Sharpie markers as you're colouring!!  This is a very important and necessary step to keep your images looking clean, crisp and the colours true.  If you'd like to read more about this then please have a look at my Sharpie Domino Queen article
on my website!
INSTRUCTIONS ON HOW TO CREATE THE PENCIL HOLDER
Some of you will recognize immediately what I used as the tube for my pencil holder - especially UK & Canadian readers!  Yes, it's the container for Maltesers that I got for Christmas a while ago ;-)  I always stash away things like this coz you just never know when you might need it!  I've also got some Smarties and Jelly Tots containers too, LOL!
To determine where to cut my tube I piled up my altered dominoes and marked on the tube where to cut.  To make sure I cut straight I circled the tube with blue painters tape.  Cut through the layers of cardboard slowly by scoring multiple times with an Xacto or craft knife until you've cut all the way through. 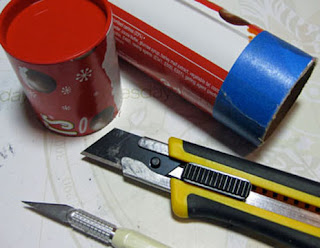 To hide the printing on the container I scanned and printed out the first page of my vintage Alice in Wonderland book.  I ran it through my Xyron to add adhesive and wrapped the tube with it.  Cut the bottom edge with scissors to create a fringe and wrap the tabs over the bottom rim. 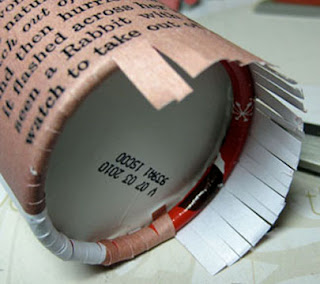 I then used the title of the page for the circle to hide all the folded tabs and cover the base of the tube. 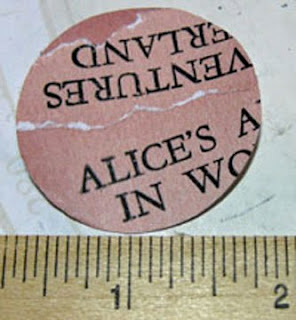 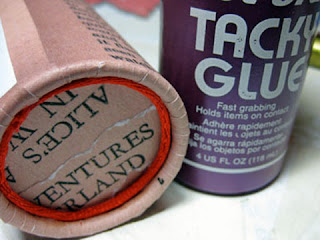 and also edged the top rim with the same cord. 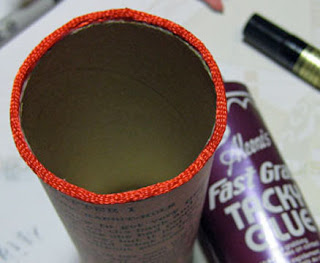 I then built the stack of altered dominoes up one side of the tube and glued them in place with E6000 as I went. 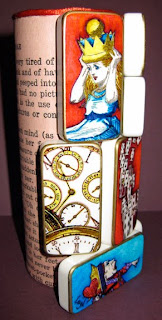 This project requires quite a bit of time but the finished result is worth it! 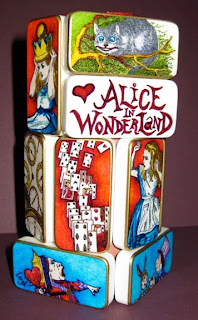 I hope you enjoyed my creation :-) 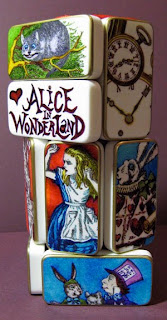 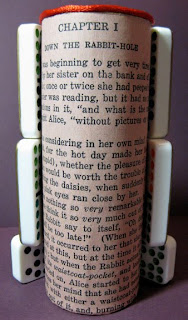