Domino Fairy Butterflies
Standing Domino Ornaments
Tutorial
I challenged my DominoART yahoo group members to create Make & Share projects for our August 2010 Challenge based on the poem 'To A Butterfly' by William Wordsworth.  I took from the poem the beauty and fragility of the butterfly and was inspired to design a 'double domino' standing ornament of a Fairy Butterfly!  I absolutely love fairies and I knew immediately I wanted to use the Masked Fairy Girl rubber stamps by About Art Accents!

There's a couple of different Masked Fairy Girls available but the two I used are on plate 147: Fairy Girls 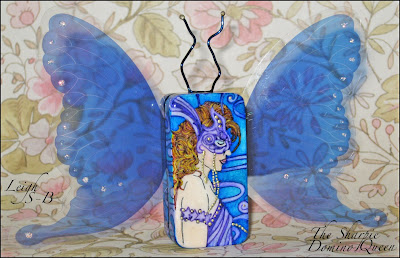 For this tutorial I'm concentrating on the Blue Fairy Butterfly.  The Green Fairy Butterfly tutorial will be coming soon so keep an eye out for it!
I used 2 standard white dominoes and stamped the front and all 4 sides of both dominoes with portions of the Butterfly Masked Fairy Girl II in coal black Ancient Page dye ink.  Stamp and heat set each side separately to avoid smudging the images. 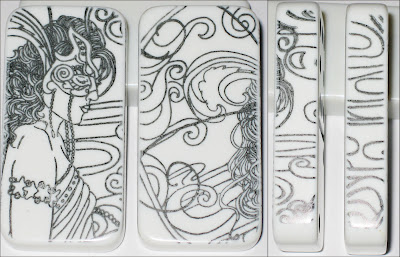 I always start my Sharpie colouring by laying in the darker areas first and then I use a lighter shade of the same colour to blend, shade and fill in the areas.  I used Blue and Turquoise Sharpies for the background. 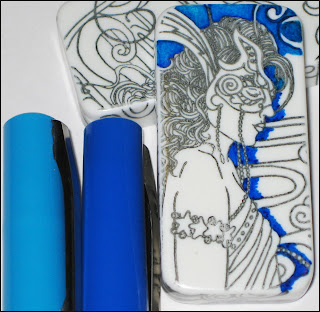 The skin is Almond, hair is a combo of Brown & Marigold, dress and flourish detail is Purple & Lilac. I then added DecoColor metallic gold accents. 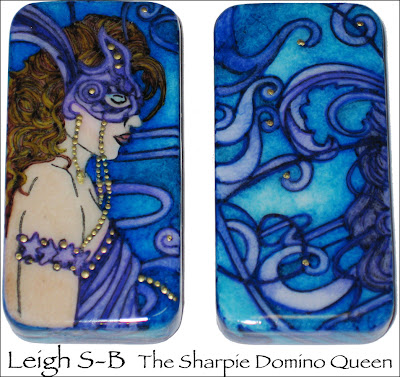 To finish off the bottom edge of the dominoes I edged and overlapped a bit onto the back of each so you don't see any white when the two dominoes are glued together.  Seal all surfaces with Judikins Diamond Glaze. 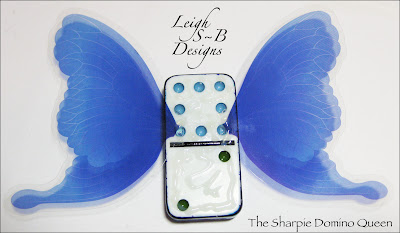 For my Fairy Butterfly wings I used some acetate wings I have for my ceramic art, but you can easily make your own!  I've made my own wings out of acetate before and they work great!  Adhere the wings to the domino with Judikins Diamond Glaze and then glue both dominoes together.  Even though the Diamond Glaze is meant as a dimensional accent and for hard glass-like surfaces it's awesome as a glue too! 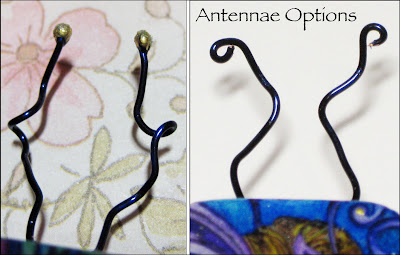 I randomly bent and twisted metallic blue craft wire for the antennae and finished with a drop of Diamond Glaze on the ends. Once the glaze was dry I coloured it metallic gold and also added a touch of opal glitter glue.
I then glued the antennae into the top groove between the two dominoes with Diamond Glaze. I also accented the wings with glitter glue for a touch of sparkle. 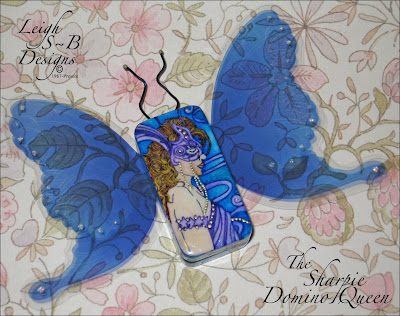 I'm thrilled with the way my Fairy Butterfly turned out.
Even though I designed her to be a standing ornament you could easily make her into a magnet ornament too by just gluing a magnet to the back. 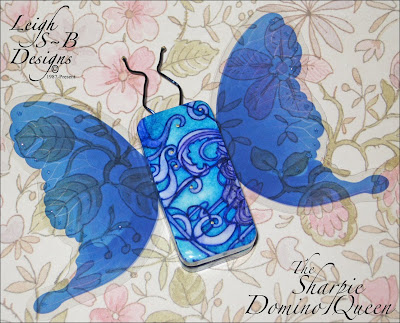